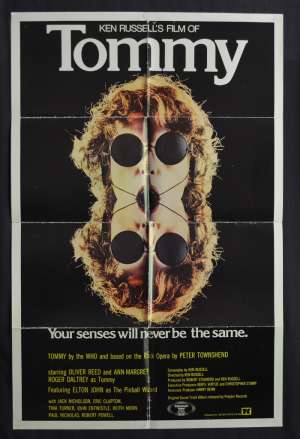 Rare Original Australian One sheet First release movie poster.Tommy is a 1975 British musical fantasy drama film based upon The Who's 1969 rock opera album Tommy about a seemingly disabled boy who becomes a religious pinball champion.Directed by Ken Russell, the film featured a star-studded ensemble cast, including the band members themselves (most notably, lead singer Roger Daltrey, who plays the title role), Ann-Margret, Oliver Reed, Eric Clapton, Tina Turner, Elton John, Arthur Brown, and Jack Nicholson. Ann-Margret received a Golden Globe Award for her performance and was also nominated for the Academy Award for Best Actress. Pete Townshend was also nominated for an Oscar for his work in scoring and adapting the music for the film. The film was shown at the 1975 Cannes Film Festival and in that year won the award for Rock Movie of the Year in the First Annual Rock Music Awards. It has gone on to have a cult following.