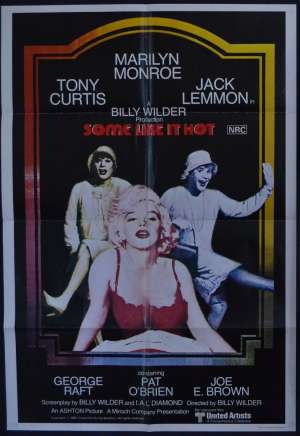 Some Like It Hot is a 1959 American romantic comedy film set in 1929, directed and produced by Billy Wilder, starring Marilyn Monroe, Tony Curtis, and Jack Lemmon. The supporting cast includes George Raft, Pat O'Brien, Joe E. Brown, Joan Shawlee, and Nehemiah Persoff. The screenplay by Billy Wilder and I.A.L. Diamond is based on a screenplay by Billy Wilder and Michael Logan from the French film Fanfare of Love. The film is about two musicians who dress in drag in order to escape from mafia gangsters whom they witnessed commit a crime inspired by the Saint Valentine's Day Massacre. Some Like It Hot opened to largely positive reviews and is today considered to be one of the greatest films of all time.