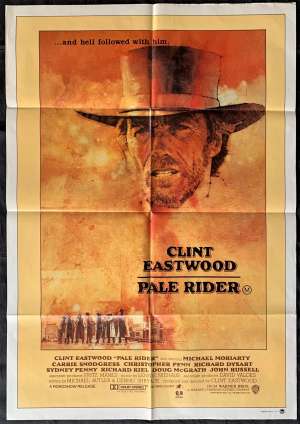 One Sheet Poster artwork by C. Michael Dudash.Pale Rider is a western film produced and directed by Clint Eastwood, who also stars in the lead role.Pale Rider was released in the United States in June, 1985, and became the highest grossing western of the 1980s. It was the first mainstream Hollywood western to be produced after the massive financial failure of Heaven's Gate and went onto received positive film reviews.  Other stars of the film included Michael Moriarty as Hull Barret , Carrie Snodgress as Sarah Wheeler , Richard Dysart as Coy LaHood , Chris Penn as Josh LaHood , Sydney Penny as Megan Wheeler and Richard Kiel as Club.