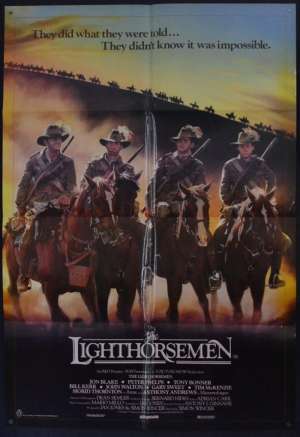 Original Country Of Origin One Sheet Poster The Lighthorsemen

One Sheet Poster.The Lighthorsemen is a 1987 Australian feature film about the men of a World War I light horse unit involved in Sinai and Palestine Campaign's 1917 Battle of Beersheeba. The film is based on a true story and most of the characters in the film were based on real people. (Elyne Mitchell wrote the novelization based on the screenplay.) It follows in the wake of other Australian New Wave war films such as Breaker Morant (1980), Gallipoli (1981) and the TV Mini Series Anzacs (1985) and Sword Of Honour (1986). Recurring themes of these films include the Australian identity, such as mateship and larrikinism, the loss of innocence in war, and also the continued coming of age of the Australian nation and its soldiers (the ANZAC spirit). The film was directed by Simon Wincer, and several pieces of footage from the climactic scenes were re-used in the episode "Palestine, October 1917" of the television series The Young Indiana Jones Chronicles. Despite being set in Palestine and Egypt, the film was shot entirely on location in Victoria and Hawker, South Australia. After the final day of filming had wrapped on 1 December 1986, actor Jon Blake was injured in a car accident near Nectar Brook, South Australia. He suffered permanent paralysis and brain damage – never to act again. The film won an AFI award in 1988 for Best Original Music Score and another for Best Achievement in Sound. The film was also nominated for Best Achievement in Cinematography.