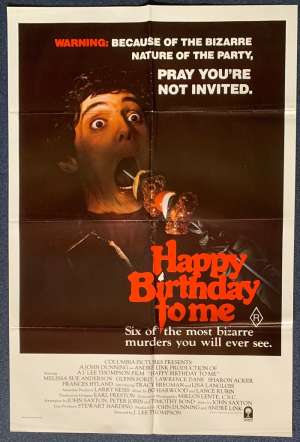 Happy Birthday To Me Poster Original Australian One Sheet

One Sheet Movie Poster.Happy Birthday to Me is a 1981 slasher film directed by J. Lee Thompson and starring Melissa Sue Anderson and Glenn Ford. Its plot revolves around six brutal murders occurring around a popular high school senior's birthday. Director J. Lee Thompson (Cape Fear 1962) became known for tossing buckets of blood about on the set of the film to increase the on-screen gore. Although the film seems to have been directly influenced by the success of Friday the 13th and Prom Night, pre-production on Happy Birthday to Me had started before those films had been released, which more than hints that the huge success of Halloween was perhaps more of an influence. Filmed mainly in Canada and upstate New York, Happy Birthday to Me was distributed by Columbia Pictures, and released theatrically in North America on May 15, 1981. While not prosecuted for obscenity, the film was seized and confiscated in the UK under Section 3 of the Obscene Publications Act 1959 during the video nasty panic. The film now enjoys a cult following and its original posters are highly sort after.