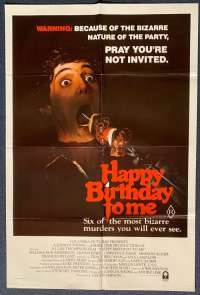 Original Australian one sheet movie poster Happy Birthday To Me

Happy Birthday to Me is a 1981 American-Canadian slasher film directed by J. Lee Thompson and starring Melissa Sue Anderson and Glenn Ford. It was released on May 15, 1981, and has since become something of a cult classic among fans of the slasher genre, with its bizarre murder methods and twisted climactic revelation.