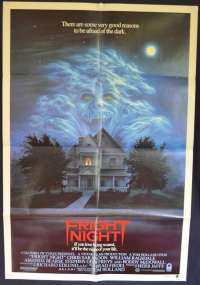 Fright Night is a 1985 American horror film written and directed by Tom Holland and produced by Herb Jaffe. It stars William Ragsdale, Chris Sarandon, Roddy McDowall, and Amanda Bearse. The film is also the directorial debut of Holland. The film follows young Charley Brewster, who discovers that his next-door neighbor, Jerry Dandrige, is a vampire. When no one believes him, Charley decides to get Peter Vincent, a TV show host who acted in films as a vampire hunter, to stop Jerry's killing spree.The film was released on August 2, 1985, and grossed $24.9 million at the box office. Over the years, the film gained more reappraisal by critics and has since gained a cult following. The film was followed by a sequel, Fright Night II in 1988, and a remake in 2011, which was in turn followed by Fright Night 2: New Blood in 2013.