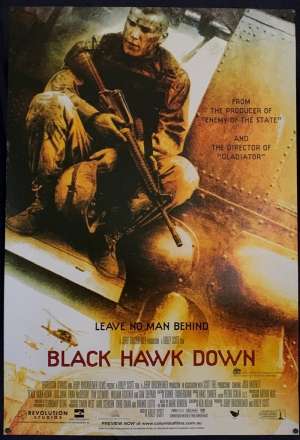 One Sheet Poster.Black Hawk Down is a 2001 war film produced and directed by Ridley Scott, from a screenplay by Ken Nolan. It is based on the 1999 non-fiction book of the same name by journalist Mark Bowden, about the U.S. military's 1993 raid in Mogadishu. The film features a large ensemble cast, including Josh Hartnett, Ewan McGregor, Eric Bana, Tom Sizemore, William Fichtner, Sam Shepard, and Tom Hardy in his first film role. Filming began in March 2001 in Salé, Morocco, and concluded in late June. The musical score for Black Hawk Down was composed by Hans Zimmer (The Pacific & Gladiator).The film was a commercial and critical success. It was nominated for four Academy Awards and won two for Best Film Editing and Best Sound at the 74th Academy Awards.