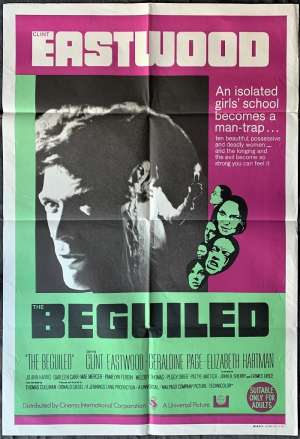 One Sheet Poster.The Beguiled is a 1971 American Southern Gothic, thriller-drama film directed by Don Siegel, starring Clint Eastwood and Geraldine Page. The script was written by Albert Maltz and is based on the 1966 novel written by Thomas P. Cullinan, originally titled A Painted Devil. The film marks the third of five collaborations between Siegel and Eastwood, following Coogan's Bluff (1968) and Two Mules for Sister Sara (1970), and continuing with Dirty Harry (1971) and Escape from Alcatraz (1979). The film received major recognition in France and is considered one of Eastwood's finest works by the French. It was also well received by critics.