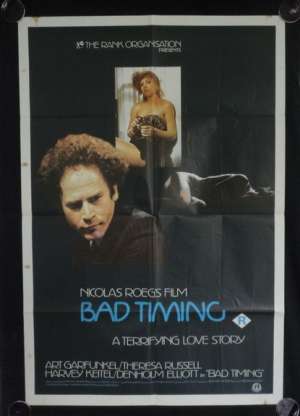 One Sheet Poster.Bad Timing is a 1980 British psychological drama film directed by Nicolas Roeg and starring Art Garfunkel, Theresa Russell, Harvey Keitel and Denholm Elliott. The plot focuses on an American woman and a psychology professor living in Vienna. It is largely told through nonlinear flashbacks and examines the details of their turbulent relationship as uncovered by a detective investigating her apparent suicide attempt. Interestingly, while Art Garfunkel was making the film, his girlfriend, Laurie Bird, committed suicide in New York. The film was controversial upon its release with mixed reviews. Some found it brilliant and others were not so sure. The film received the Toronto Festival of Festivals’ highest honour, the People's Choice Award in 1980, as well as the London Film Critics Circle Award for Best Director. However it received only a limited release in the US, showing for a brief period in theatres and thus poster memorabilia today is rare. The television rights were acquired by the Los Angeles-based pay cable network "Z Channel" and aired in heavy rotation, allowing the film to obtain cult status.