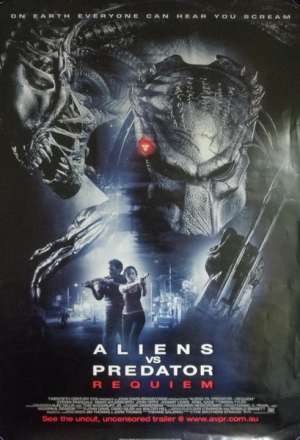 Aliens vs. Predator: Requiem (also known as AVP:R) is a 2007 American science fiction action film directed by the Brothers Strause (Colin and Greg Strause) in their directorial debut and written by Shane Salerno. The film stars Steven Pasquale, Reiko Aylesworth, John Ortiz, Johnny Lewis, and Ariel Gade. It is a sequel to the 2004 film Alien vs. Predator and the second and latest installment in the Alien vs. Predator franchise, continuing the crossover between the Alien and Predator franchises.Set immediately after the events of the previous film, the film begins with a Predator ship crashing into a forest outside of Gunnison, Colorado, where a Alien-Predator hybrid known as the Predalien escapes and makes its way to the nearby small town. A skilled veteran Predator is dispatched to kill the Predalien, as the townspeople try to survive the ensuing carnage. On May 8, 2008, the film was nominated for an MTV Movie Award for Best Fight Sequence. On the home media front, In its first week of release, Aliens vs. Predator: Requiem debuted at number two on the DVD charts, earning $7.7 million and number one on the Blu-ray charts. The film has made $27,403,705 in DVD sales in the United States alone.