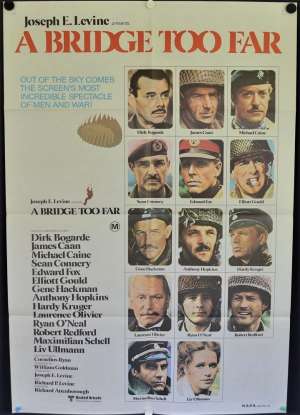 Original Australian One Sheet Poster A Bridge Too Far

A Bridge Too Far is a 1977 American epic war film based on the 1974 book of the same name by Cornelius Ryan, adapted by William Goldman. It was produced by Joseph E. Levine and Richard P. Levine and directed by Richard Attenborough.The film tells the story of the failure of Operation Market Garden during World War II, the Allied attempt to break through German lines and seize several bridges in the occupied Netherlands, including one at Arnhem, with the main objective of outflanking German defences in order to end the war by Christmas of 1944.The ensemble cast includes Dirk Bogarde, Ryan O'Neal, James Caan, Michael Caine, Sean Connery, Edward Fox, Elliott Gould, Anthony Hopkins, Gene Hackman, Hardy Krüger, Laurence Olivier, Robert Redford (Steve McQueen was Attenborough's first choice for the role but McQueen turned it down), Maximilian Schell and Liv Ullmann. The film was a box office disappointment in the US but performed well in Europe.