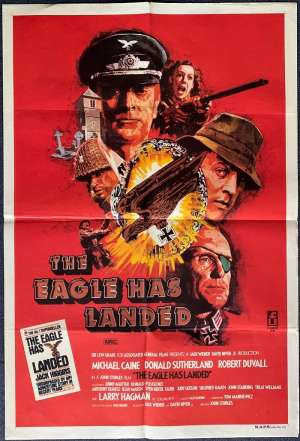 Original Australian One Sheet Poster The Eagle Has Landed

The Eagle Has Landed is a 1976 British film directed by John Sturges and starring Michael Caine, Donald Sutherland and Robert Duvall. Based on the novel The Eagle Has Landed by Jack Higgins, the film is about a fictional German plot to kidnap Winston Churchill during the height of the Second World War. The Eagle Has Landed was Sturges’ final film, and received positive reviews and was successful upon its release. Caine was originally offered the part of Devlin but did not want to play an IRA man so he asked if he could have the role of Steiner. Richard Harris stepped into the part of Devlin but then it was felt he was too associated with financing the real IRA so Donald Sutherland was given the role.