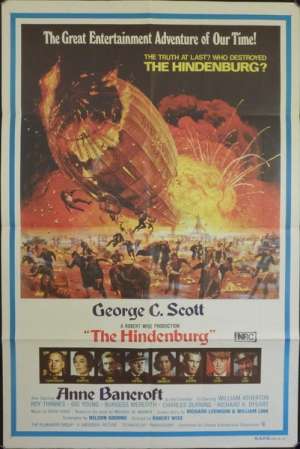 Original Australian One Sheet Movie Poster.The spectacular newsreel footage of the unfortunate Hindenburg crashing to the ground in a ball of flames has become one of the most instantly recognisable images of the twentieth century. 35 people died on that fateful day, in an airship that was the pride of the Third Reich, a luxurious flying hotel ultimately to become known as the 'Titanic of the Sky'. Hindenburg is a brooding and powerful drama-documentary that explores the iconic 1937 German airship disaster against the strange world of the many characters who were aboard. It tells the Hindenburg's story from its launch to its final voyage and spectacular demise, and reveals the fatal flaw that led to its destruction. The Hindenburg tragedy was a catastrophe that was as significant as the Titanic disaster. Until that fateful day, airships were seen as the upcoming way to travel in style, comfort and speed. After Hindenburg the dream of airship travel was dead forever. Incorporates real-life footage and radio broadcast of the disaster upfront, followed by witness statements, theories, book extracts, reconstructions and living testimonies