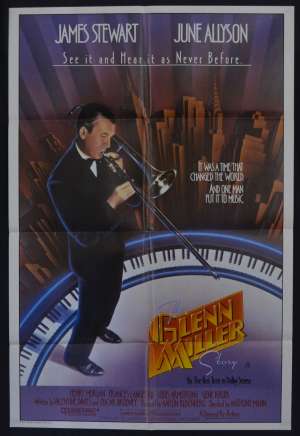 The Glenn Miller Story is a 1954 American film about the eponymous American band-leader, directed by Anthony Mann and starring James Stewart in their first non-western collaboration. Upon release in 1954, The Glenn Miller Story was massively successful at the box office. In 1954, the film was nominated for three Academy Awards, including Best Screenplay (by Valentine Davies and Oscar Brodney) and Best Score (by Henry Mancini and Joseph Gershenson). The film won the Oscar for Best Sound Recording, by Leslie I. Carey. Its soundtrack was equally successful, reaching number one on the Billboard album charts in 1954, featuring a number of Glenn Miller's most popular recordings. This is the second of three movies that paired Jimmy Stewart and June Allyson, the others being The Stratton Story and Strategic Air Command. In 1955 William Goetz estimated that Stewart had earned $2 million from the film as he took a percentage of the profits.