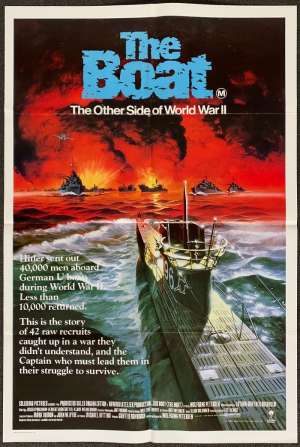 One Sheet Poster. The Boat or Das Boot as it is in German is a 1981 German epic war film written and directed by Wolfgang Petersen, produced by Günter Rohrbach, and starring Jürgen Prochnow, Herbert Grönemeyer and Klaus Wennemann. An adaptation of Lothar-Günther Buchheim's 1973 German novel of the same name, the film is set during World War II and tells the fictional story of U-96 and its crew. The screenplay used an amalgamation of exploits from the real U-96, a Type VIIC-class U-boat. Heinrich Lehmann-Willenbrock, the captain of the real U-96 and one of Germany's top U-boat "tonnage aces" during the war, and Hans-Joachim Krug, former first officer on U-219, served as consultants.Its high production cost ranks it among the most expensive films in the history of German cinema. Excellent poster artwork by Gary Meyer.