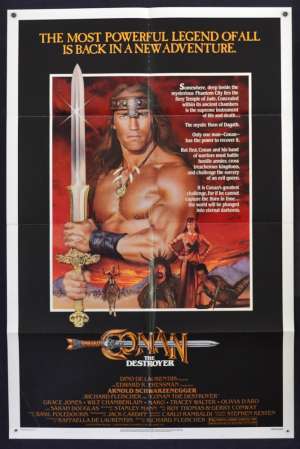 Original USA one sheet movie poster.Conan the Destroyer is a 1984 American sword and sorcery/adventure film directed by Richard Fleischer, starring Arnold Schwarzenegger and Mako Iwamatsu reprising their roles as Conan and Akiro the wizard, respectively. The cast also includes Grace Jones, Wilt Chamberlain, Tracey Walter, and Olivia d'Abo. It is the sequel to Conan the Barbarian. The film succeeded at the box office upon its 1984 release, grossing a respectable $31,042,035 in the U.S. and an additional $69 million in international markets, with the film grossing a combined total of $100,042,035. This success led Schwarzenegger, Fleischer, and De Laurentiis to team up again to make Red Sonja a year later.