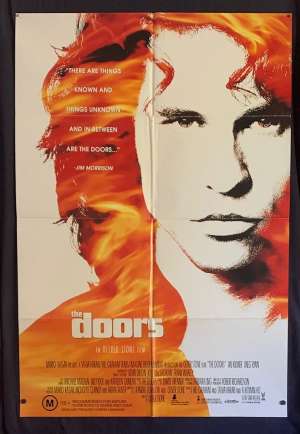 One Sheet Poster.The Doors is a 1991 American biographical film about the 1960–1970s rock band of the same name, which emphasizes the life of its lead singer, Jim Morrison. It was directed by Oliver Stone but other film directors Brian De Palma, Martin Scorsese and William Friedkin had all flirted with making a Doors biopic over the years. Val Kilmer starred as Morrison but other actors including Tom Cruise, Johnny Depp, John Travolta, Richard Gere, Michael Hutchence – INXS and Bono – U2 were each considered for the role of Morrison.The film features Kyle MacLachlan as keyboardist Ray Manzarek, Frank Whaley as guitarist Robby Krieger, Kevin Dillon as drummer John Densmore and Kathleen Quinlan as journalist Patricia Kennealy. The film portrays Morrison as a larger-than-life icon of 1960s rock and roll and counterculture, including portrayals of Morrison's recreational drug use, free love, hippie lifestyle, alcoholism, interest in hallucinogenic drugs as entheogens, and, particularly, his growing obsession with death, presented as threads which weave in and out of the film. During the concert scenes, Kilmer did his own singing, performing over the Doors' master tapes without Morrison's lead vocals, avoiding lip-synching. The film became a sleeper hit and has gone on to be a cult film.