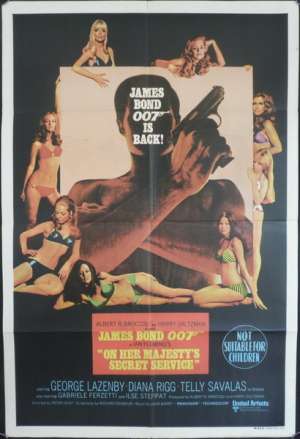 Original Australian One Sheet Poster On Her Majesty's Secret Service

One Sheet Poster.On Her Majesty's Secret Service is a 1969 spy film and the sixth in the James Bond series produced by Eon Productions. It is based on the 1963 novel of the same name by Ian Fleming. Following Sean Connery's decision to retire from the role after You Only Live Twice, Eon Productions selected an unknown actor and model, George Lazenby, to play the part of James Bond. Lazenby was offered a contract for seven films; however, he was convinced by his agent Ronan O'Rahilly that the secret agent would be archaic in the liberated 1970s, and as a result he left the series after the release of On Her Majesty's Secret Service in 1969. A decision that proved to be not quite right. It is the only Bond film to have been directed by Peter R. Hunt, who had served as a film editor and second unit director on previous films in the series. Hunt, along with producers Albert R. Broccoli and Harry Saltzman, decided to produce a more realistic film that would follow the novel closely. It was shot in Switzerland, England, and Portugal from October 1968 to May 1969. Although its cinema release was not as lucrative as its predecessor You Only Live Twice, On Her Majesty's Secret Service was still one of the top performing films of the year. Critical reviews upon release were mixed, but the film's reputation has improved greatly over time.