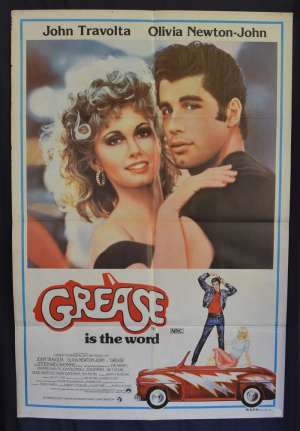 Grease is a 1978 American musical romantic comedy film directed by Randal Kleiser and produced by Paramount Pictures. The film is an adaptation of Warren Casey and Jim Jacobs' 1971 musical of the same name about two lovers in a 1950's high school. The film stars John Travolta, Olivia Newton-John, Stockard Channing, and Jeff Conaway. Released on June 16, 1978, the film was successful both critically and financially at the box office, becoming the highest grossing film of the year. In the United States, the film still remains the highest-grossing movie musical of all time.Its soundtrack album ended 1978 as the second-best selling album of the year in the U.S., behind the soundtrack of Saturday Night Fever, another film starring Travolta.The soundtrack is also the second best-selling album ever released and top-selling soundtrack in history. The film was nominated for one Academy Award for Best Original Song. A sequel, Grease 2, was released in 1982, featuring few cast members reprising their roles.