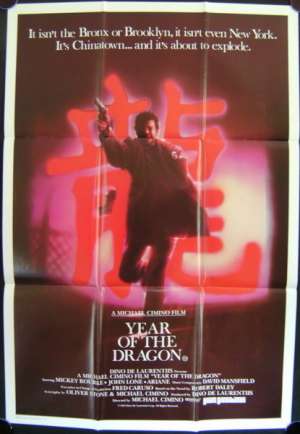 Original Australian One Sheet Movie Poster Year Of The Dragon

Year of the Dragon is a 1985 American neo-noir crime film directed by Michael Cimino, starring Mickey Rourke, Ariane Koizumi and John Lone. The screenplay was written by Cimino and Oliver Stone and adapted from the novel by Robert Daley.This was Cimino's first film after the infamous failure of Heaven's Gate (1980). Year of the Dragon is a New York crime drama and an exploration of gangs, the illegal drug trade, ethnicity, racism, and stereotypes. Over the years it has gained a cult following since its release. Quentin Tarantino has praised this film as one of his favorites, naming its climactic train tracks shoot-out as one of his favourite "Killer Movie Moments" in 2004, remarking, "You forget to breathe during it!"