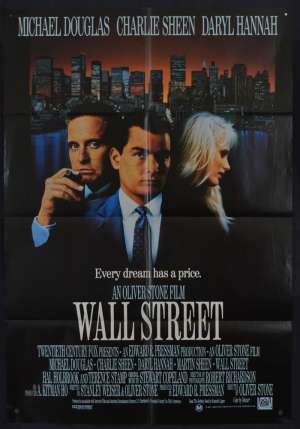 Wall Street is a 1987 American drama film, directed and co-written by Oliver Stone, which stars Michael Douglas, Charlie Sheen, and Daryl Hannah. Stone made the film as a tribute to his father, Lou Stone, a stockbroker during the Great Depression. The character of Gekko is said to be a composite of several people, including Dennis Levine, Ivan Boesky, Carl Icahn, Asher Edelman, Michael Ovitz, Michael Milken, and Stone himself. Originally, the studio wanted Warren Beatty to play Gekko, but he was not interested; Stone, meanwhile, wanted Richard Gere, but Gere passed on the role. The film was well received among major film critics. Douglas won the Academy Award for Best Actor, and the film has come to be seen as the archetypal portrayal of 1980s success, with Douglas' character declaring that "greed is good."