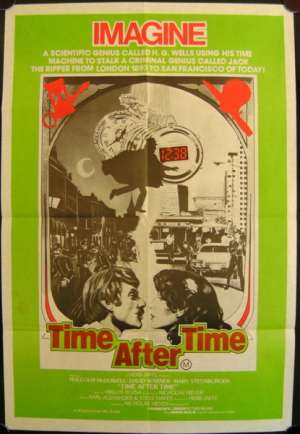 One Sheet Poster.Time After Time is a 1979 American Metrocolor science fiction film directed by screenwriter Nicholas Meyer and starring Malcolm McDowell, David Warner, and Mary Steenburgen. According to David Warner, the studio wanted Mick Jagger for the role of John Leslie Stevenson (Warner’s role) but director Nicholas Meyer and producer Herb Jaffe fought for Warner to get the role. Time After Time was filmed throughout San Francisco. Filmed in Panavision, it was the directing debut of Meyer, whose screenplay is based on the premise from Karl Alexander's novel Time After Time (which was unfinished at the time) and a story by Alexander and Steve Hayes. The film presents a story in which British author H. G. Wells uses his time machine to pursue Jack the Ripper into the 20th century. The interior scenes set in London borrow heavily from the 1960 film, The Time Machine which was based on the 1895 H.G. Wells novella of the same name. The film premiered with a gala presentation at the Toronto International Film Festival on September 7, 1979. Time After Time received a positive response from critics. The cast and Director went on to win several awards.