To Be Or Not To Be One Sheet Australian Movie poster 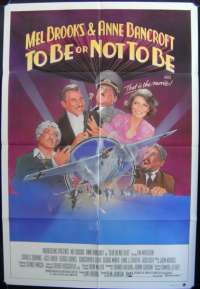 In this hilarious remake of Ernst Lubitsch's classic, Mel Brooks gets stuck into the Nazis in one ofhis funniest satires yet. Frederick Bronski (Brooks, The Producers) is an infamous Polish actor whorigorously competes against his actress wife (Anne Bancroft, The Graduate) for the limelight and jostles for centre stage among his acting troupe. But when the Nazis invade Poland all hell breaks loose and they are thrust into a madcap frenzy of murder, mistaken identities and ridiculous improvising to entertain the Gestapo whilst saving the Polish underground. Featuring Oscar nominee Charles Durning, Christopher Lloyd(Back To The Future) and Jose Ferrer (Moulin Rouge), To Be Or Not To Be is a roaring laugh-fest that will have you on your feet applauding for more.