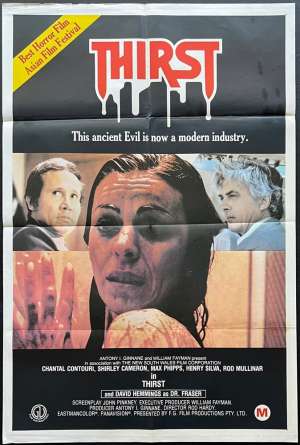 Country Of Origin Poster. Thirst is a 1979 Australian Vampire film by Rod Hardy. It stars Australian actors Chantal Contouri and Max Phipps and British actor David Hemmings. It has been described as a blend of vampire and science fiction genres, influenced by the 1973 film Soylent Green as well as drawing on the vampire folklore of Elizabeth Báthory – one of several vampire films in the 1970s to do so.