Throw Momma From The Train One Sheet Australian Movie poster 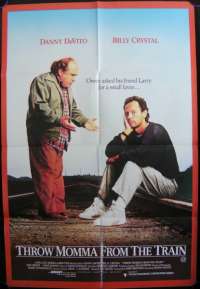 Owen (Danny De Vito) is a friendless would-be mystery writer who has had all he can take. He would do anything to get rid of his overbearing mother (Anne Ramsey), whose howling voice and domineering attitude have pushed him to the absolute limit. He even strikes a deal with Larry (Billy Crystal), his writing teacher, to knock off his much-hated ex-wife, with the understanding that the instructor will reciprocate. Laugh till you cry with two of Hollywoods biggest stars in a dark comedy hailed by critics as clever and engaging from the beginning to end.