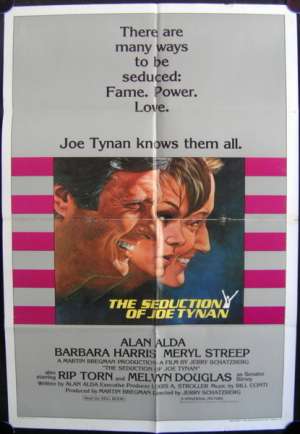 One Sheet Poster.The Seduction of Joe Tynan is a 1979 American political drama film directed by Jerry Schatzberg and produced by Martin Bregman. The screenplay was written by Alan Alda, who also played the title role. The film stars Alda, Barbara Harris, and Meryl Streep, with Rip Torn, Melvyn Douglas, Charles Kimbrough, and Carrie Nye. Meryl Streep said that she was on "automatic pilot" during filming because she went to work not long after the death of her lover, John Cazale, adding that she got through the process largely due to Alda's support. Streep went on to win no fewer than 4 major critic’s awards for her role.