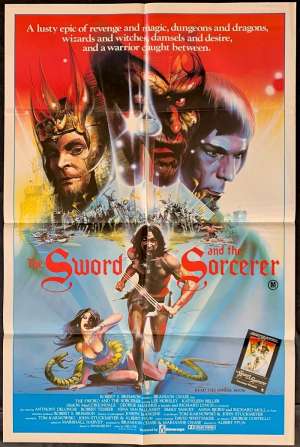 One Sheet Poster with stunning art by Peter Andrew Jones.The Sword and the Sorcerer is a 1982 American sword and sorcery fantasy film directed by Albert Pyun and starring Lee Horsley, Simon McCorkindale, Richard Lynch, and Richard Moll.The screenplay concerns a mercenary with a three-bladed sword who rediscovers his royal heritage when he is recruited to help a princess foil the designs of a brutal tyrant, and a powerful sorcerer, in conquering the land. The Sword and the Sorcerer was released theatrically in the United States in April 1982.The film went on to gross $39,103,425 at the box office, making it the most profitable independent film of 1982. The film has since gone on to be a cult classic and is regarded as one of Albert Pyun's best films.