Sea Killer Poster Original One Sheet 1981 Aka Beyond the Reef Frank C. Clarke 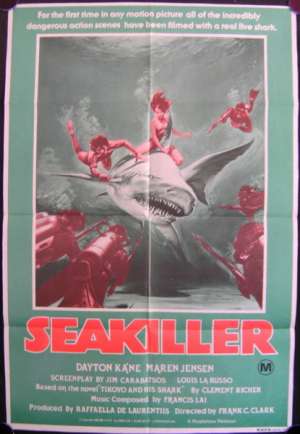 Original One Sheet Poster Sea Killer Aka Beyond the Reef

One Sheet Poster.Sea Killer (Beyond The Reef) is a 1981 American adventure film directed by Frank C. Clarke and written by Louis LaRusso II and James Carabatsos. The film was actually completed in 1979, but not released until 1981.The film stars Dayton Ka'ne, Maren Jensen, Kathleen Swan, Keahi Farden, Oliverio Maciel Diaz, George Tapare, David Nakuna, Robert Atamu and Bob Spiegel. The storyline is as follows: Tikoyo lives by the Bora Bora lagoon in the South Pacific where he found a man-eating a tiger shark when it was an orphaned baby - just a foot long. He named the Tiger Shark Manidu, and it grew to be sixteen feet long. Tikoyo believes that his companion houses the soul of a wise old man, and helps him guard the sacred black pearls in the lagoon. In fact, Manidu does protect Tikoyo and his girlfriend Diana, only eating those who are their enemies, or who seek to destroy their environment, or steal the pearls. Production was made on the same sets and locations as" The Hurricane " (1979) using many of the same crew.