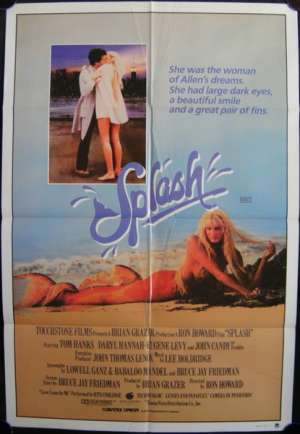 One Sheet Poster. Splash.Academy Award winner Tom Hanks stars as Allen Bauer, a workaholic who's convinced he can't fall in love. That is, until he's mysteriously rescued from a boating accident by the woman of his dreams! Before you can say "mermaid", Allen and Madison (Daryl Hannah, My Favourite Martian) are swept away on the tide of a hilarious and heartwarming romance. But when the world discovers Madison's secret, it's sink or swim for the two new lovers! Master filmmaker Ron Howard (Apollo 13) directs a star-studded cast, including John Candy (Uncle Buck) as Hanks' hilariously obnoxious brother in a magical tale that you'll fall for hook, line and sinker!