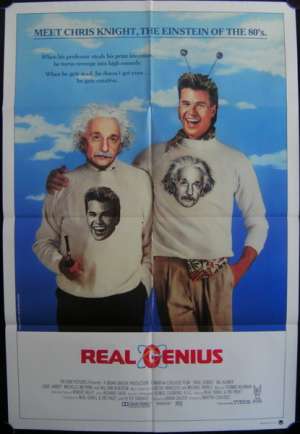 One Sheet Poster. Real Genius is a 1985 American science fiction comedy film directed by Martha Coolidge, written by Neal Israel, Pat Proft, and Peter Torokvei, and starring Val Kilmer and Gabriel Jarret. The film is set on the campus of Pacific Tech, a science and engineering university similar to Caltech. Chris Knight (Kilmer) is a genius in his senior year working on a chemical laser. Mitch Taylor (Jarret) is a new student on campus who is paired up with Knight to work on the project. The film received positive reviews from critics, and it grossed $12 million at the North American box office.