Revenge Of The Pink Panther One Sheet Australian Movie poster 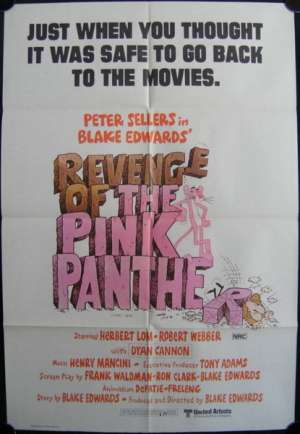 One Sheet Poster.Revenge of the Pink Panther is a 1978 British comedy film. It is the sixth film in The Pink Panther comedy film series. Released in 1978, it is the final on-set performance of "Inspector Jacques Clouseau" by Peter Sellers, who died in 1980. The storyline is as follows: To prove that he still is strong and powerful, Philippe Douvier decides to kill Clouseau. Once news of his "death" has been announced, Clouseau tries to take advantage of it and goes undercover with Cato to find out who tried to kill him. The film was shot in France, England and in Hong Kong with some scenes filmed at The Excelsior hotel. It was also the last instalment in the series that was distributed solely by United Artists. Romance of the Pink Panther was a Pink Panther film that Sellers had written—and willing to make without Edwards—before Sellers' death in July 1980.