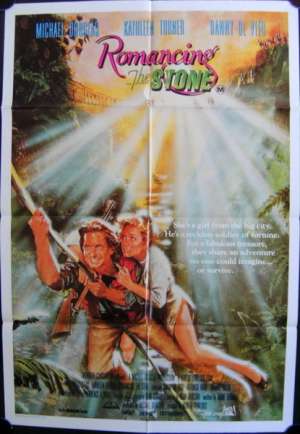 One Sheet Poster.Romancing the Stone is a 1984 American romantic comedy-adventure film directed by Robert Zemeckis and written by Diane Thomas. Diane Thomas (a Mailbu Waitress) only got to write one script that got turned into a movie as she died in a car crash shortly after this film's release. The film stars Michael Douglas (Sylvester Stallone was originally considered for this role), Kathleen Turner, and Danny DeVito. Filming locations included Veracruz, Mexico (Fort of San Juan de Ulúa); and Huasca de Ocampo, Mexico. Parts of the film were also shot in Snow Canyon, Utah. Studio insiders expected Romancing the Stone to flop (to the point that, after viewing a rough cut of the film, the producers of the then-under-development Cocoon fired Zemeckis as director of that film),but the film became a surprise hit. It became 20th Century Fox's "only big hit" of 1984 earning over $86 million worldwide at the box office.  Zemeckis later stated that the success of Romancing the Stone allowed him to make Back to the Future which was an even larger success. Romancing the Stone critically went onto win Golden  Globe awards and was nominated for Academy Awards.