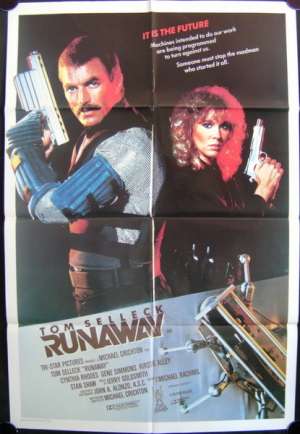 One Sheet Poster.Runaway is a 1984 American Metrocolor science fiction action film written and directed by Michael Crichton (Westworld), starring Tom Selleck (High Road To China), Gene Simmons (Kiss), Cynthia Rhodes (Flashdance) and Kirstie Alley (Deadly Pursuit) filmed in Panavision. Selleck portrays a police officer assigned to track down dangerous robots, while Simmons is a scientist who hopes to profit from his malevolent manipulation of robots. Filming took place from 29 May to August 1984 in Vancouver while star Tom Selleck was on a break from Magnum, P.I. The film marked the first feature acting role for rock star Gene Simmons (he had been in ‘Kiss Meets the Phantom of the Park’). Simmons had been interested in acting for a while and had studied it since 1981.Simmons had previously turned down parts in Flashdance and Dr Detroit because he was not interested in musicals or comedy. Kirstie Alley earned a 1984 Saturn Award nomination for Best Supporting Actress for her performance. Selleck reflects on the movie today as being one he is very proud of.