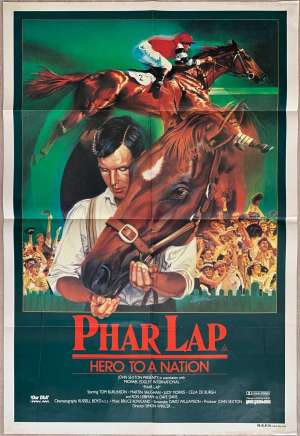 One Sheet Poster art by Brian Clinton.Phar Lap (also released as Phar Lap: Heart of a Nation) is a 1983 film about the racehorse Phar Lap. The film stars Tom Burlinson (as Tommy Woodcock) and was written by famous Australian playwright David Williamson. The Thoroughbred gelding who played Phar Lap was Towering Inferno. He was bred by Shirley Pye-Macmillan at Walcha, New South Wales and later owned by Heath Harris. Towering Inferno was killed by lightning on 15 April 1999. The real Tommy Woodcock played a trainer in the movie. Phar Lap grossed $9,258,884 at the box office in Australia,which is equivalent to $24,443,454 in 2009 dollars. Phar Lap remains one of the most popular Australian films ever made.