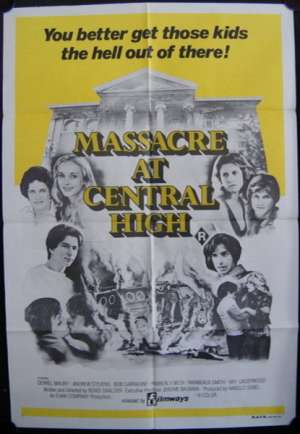 Rare original Australian One Sheet movie poster. Massacre at Central High is a 1976 horror-thriller film directed by Dutch director Rene Daalder, a protégé of Russ Meyer. Despite its title, it is not at all a slasher film; the film is more an odd and violent political allegory, which tells the story of a series of revenge killings at a fictional high school. The cast was largely made up of unknowns, but included well-known actors Robert Carradine, Lani O'Grady, Kimberly Beck, and Andrew Stevens. In the UK the film was released theatrically as Blackboard Massacre. It was shot on 35mm film, and had a running time of 87 minutes.The film has been described as "predicting punk and Columbine" and as "the epitome of the '70s meathead ethic fused with an apt social commentary"