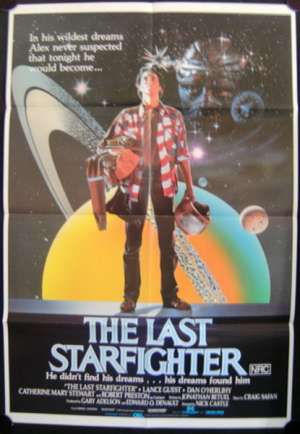 One Sheet Poster.The Last Starfighter is a 1984 American space opera film directed by Nick Castle. The film tells the story of Alex Rogan (Lance Guest), a teenager recruited by an alien defence force to fight in an interstellar war. It also features Robert Preston, Dan O'Herlihy, Catherine Mary Stewart, Norman Snow, and Kay E. Kuter. The Last Starfighter, along with Disney's Tron, has the distinction of being one of cinema's earliest films to use extensive computer-generated imagery (CGI) to depict its many starships, environments and battle scenes. It is one of the first films to use CGI to represent "real-life" objects instead of digital imaging. The Gunstar and other spaceships were the design of artist Ron Cobb, who also worked on Alien, Star Wars and Conan the Barbarian. The Last Starfighter was Preston's final role on the big screen (though he did cameos in TV movies afterwards until his death in 1987). His character, a "lovable con-man", was a nod to his most famous role as Harold Hill in The Music Man. The film was well received by critics and commercially was a success.