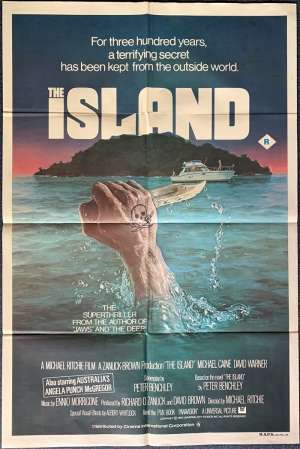 One Sheet Poster.The Island is a 1980 American action-adventure horror film, directed by Michael Ritchie and starring Michael Caine, David Warner and Angela Punch McGregor. The film was based on a novel of the same name by Peter Benchley (Jaws) who also wrote the screenplay. It is about a savage group of pirates, made up of outcasts, thieves, and murderers, who are hidden from the outside world by an uncharted Caribbean island, and who've raided boats to sustain themselves, since the 18th century. Benchley was paid $1.25 million for film rights to the novel and a first draft screenplay. The United States Coast Guard cutter Dauntless stands in for the fictitious ‘USCGC New Hope’ in the movie. Angela Punch McGregor was cast after Michael Ritchie saw her in the Australian film ‘Newsfront.’The film was mostly shot on the islands of Antigua and Abacuo.