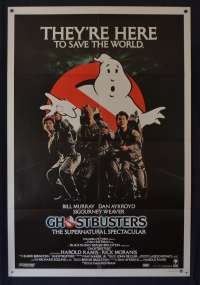 Ghostbusters is a 1984 American supernatural comedy film directed and produced by Ivan Reitman and written by Dan Aykroyd and Harold Ramis. It stars Bill Murray, Aykroyd and Ramis as eccentric parapsychologists who start a ghost-catching business in New York City. Sigourney Weaver and Rick Moranis co-star as a client and her neighbour, and Ernie Hudson as the Ghostbusters' first recruit. Aykroyd conceived Ghostbusters as a project for himself, friend John Candy and fellow Saturday Night Live alumnus John Belushi, with the "Ghostmashers" travelling through time and space. John Candy decided to not participate (although he does appear in the video of the theme song) and Aykroyd and Ramis rewrote the script following Belushi's death. Released in the United States on June 8, 1984, it received mainly positive reviews and grossed $242 million in the United States and more than $295 million worldwide. At the 57th Academy Awards, it was nominated for two Oscars - Effects and Song.