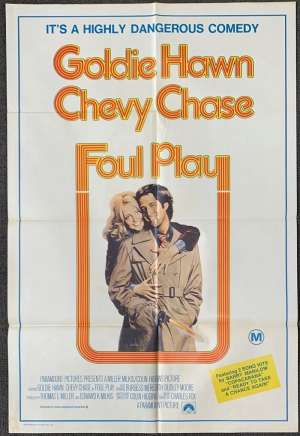 One Sheet Poster.Foul Play is a 1978 American romantic comedy thriller film written and directed by Colin Higgins, and starring Goldie Hawn, Chevy Chase, Dudley Moore, Burgess Meredith, Eugene Roche, Rachel Roberts, Brian Dennehy and Billy Barty. In it, a recently divorced librarian is drawn into a mystery when a stranger hides a roll of film in a pack of cigarettes and gives it to her for safekeeping. Foul Play is an homage to director Alfred Hitchcock, several of whose films are referenced during the film. The premise of an innocent person becoming entangled in a web of intrigue is common in Hitchcock films, such as The 39 Steps, Saboteur, North by Northwest and, most notably, The Man Who Knew Too Much, which inspired the opera house sequence in Foul Play. Higgins had written the role of Stanley Tibbets for Tim Conway, but when the actor rejected it, he offered it to Dudley Moore instead which led to him being cast in 10. Higgins met with Farrah Fawcett to play the female lead before going with Goldie Hawn. His first choice for the male lead was Harrison Ford (who had been Higgins' carpenter) who also turned it down. Steve Martin was offered the role but did not end up playing it. Eventually Chevy Chase was cast. The film received seven Golden Globe Award nominations, as well as Academy Award nominations.