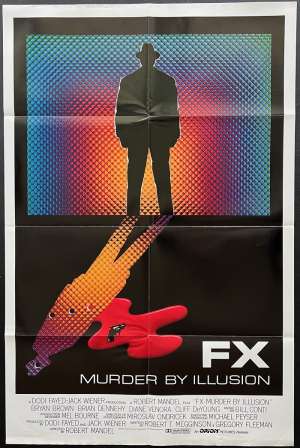 FX Murder By Illusion One Sheet poster / F/X (also known as or subtitled Murder by Illusion) is a 1986 American action-thriller film about Rollie Tyler (Bryan Brown), an expert in the art of special effects (F/X) with a reputation built by his work on many low-budget hack-and-slash films such as I Dismember Mama. The Department of Justice hires him to stage the murder of a gangster about to enter the Witness Protection Program.