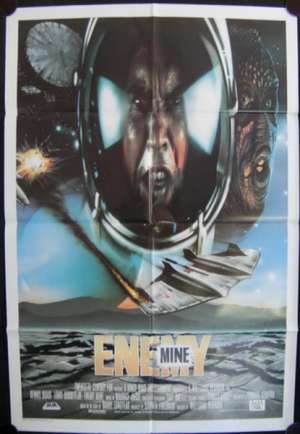 One Sheet Poster.Enemy Mine is a 1985 West German-American dark science fiction drama film directed by Wolfgang Petersen and written by Edward Khmara, based on Barry B. Longyear's novella of the same name. The film stars Dennis Quaid and Louis Gossett, Jr. as a human and alien soldier, respectively, who become stranded together on an inhospitable planet and must overcome their mutual distrust in order to cooperate and survive. The film began production in Budapest in April 1984 under the direction of Richard Loncraine, who quickly ran into "creative differences" with producer Stephen Friedman and executives at 20th Century Fox; the project was shut down after a week of shooting. Petersen then took over as director and reshot Loncraine's scenes after moving the production to Munich. Upon release, The Los Angeles Times praised the film, calling it "surprisingly coherent, surprisingly enjoyable". The movie received similar praise from critics Gary Franklin, Gene Siskel, and Leonard Maltin. Big success was found in the former Soviet Union, where it became the first Western sci-fi film shown in the theatres. It gained a cult following afterwards in many other parts of the world.