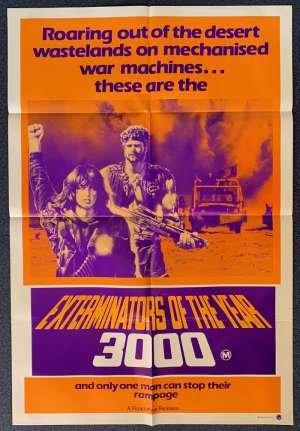 Original Australian One Sheet Poster Exterminators Of The Year 3000

One Sheet Poster.Exterminators of the Year 3000 (Italian: Il Giustiziere della Strada) is a 1983 Italian-Spanish science fiction action film directed by Giuliano Carmineo. Exterminators of the Year 3000 was shot in Italy and Spain by director Giuliano Carnimeo who is credited under the name Jules Harrison.The film is set in a post-apocalyptic future where water is considered a precious substance. A group of people turn towards a stranger to battle a motorcycle gang over an outpost where water is located. It has been described as a Mad Max 2 derivative.