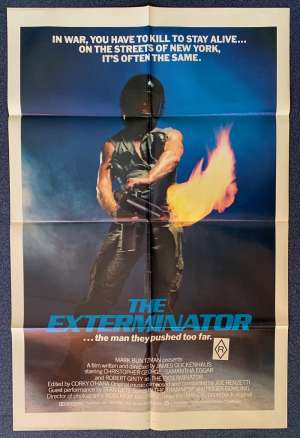 USA International One Sheet Poster. The Exterminator is a 1980 American vigilante action film written and directed by James Glickenhaus. It stars Robert Ginty as the Vietnam War veteran John Eastland, also known as "The Exterminator". When a group of thugs paralyse his friend, Eastland becomes a vigilante; embarking on a mission to cleanse New York of organized crime. The film also stars Samantha Eggar, Christopher George, and Steve James. Samuel L. Jackson appears in an uncredited role as a movie extra. With a budget of 2 million, the film was a success as it made 35 million. Due to its graphic violence, The Exterminator has been a controversial subject since its release and is now a cult film.