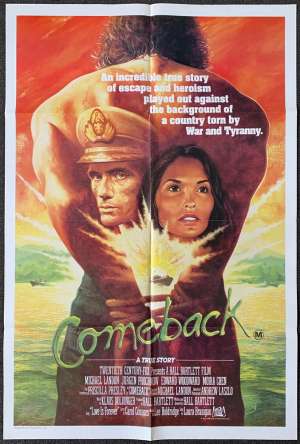 Original Australian one sheet movie poster. Comeback or “Love Is Forever” is a 1982 film based on the experiences of Australian journalist John Everingham in Laos and Thailand. It was written, directed and co-produced by Hall Bartlett and co-produced by Michael Landon who played the lead role in the film. Also starring were Laura Gemser, Jürgen Prochnow, Edward Woodward and Priscilla Presley.Filmed in Thailand, it was released outside the United States in cinemas under the title of Comeback or Passion and Valor and shown first in America on television.