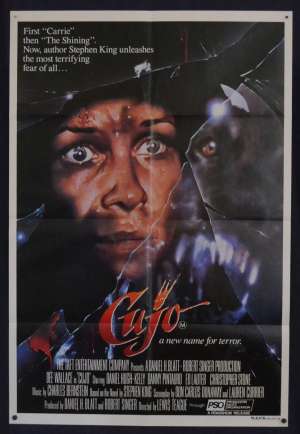 Cujo is a 1983 American psychological horror/thriller film based on Stephen King's novel of the same name. It was directed by Lewis Teague, and written by Don Carlos Dunaway and Lauren Currier. The original director was Peter Medak, who left the project two days into filming, along with his DOP Tony Richardson. They were replaced by Lewis Teague and Jan de Bont respectively. The film stars Dee Wallace and Danny Pintauro.Despite the film receiving mixed reviews and being a modest success during its theatrical release, the film has gathered a major cult following in the years since its release. Stephen King called the film "terrific" and named it one of his favourite adaptations.