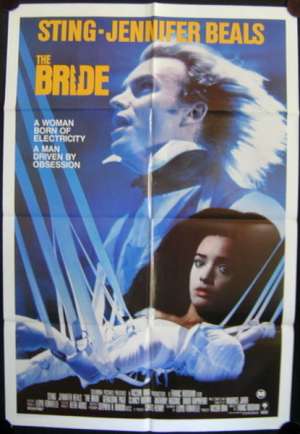 The Bride is a 1985 British-American horror film directed by Franc Roddam and written by Lloyd Fonvielle, based on Mary Shelley's novel Frankenstein. The film stars Sting as Baron Charles Frankenstein and Jennifer Beals as Eva, a woman he creates in the same fashion as his infamous monster. The film, an international co-production between the United Kingdom and the United States, was released theatrically on August 16, 1985 by Columbia Pictures. Frankstein's full name in the film is Baron Charles Frankenstein, unlike Mary Shelley's Victor Frankenstein or the classic Universal Studios movie's Henry Frankenstein. The dwarf in the film is named Rinaldo, also the name of blacklisted Abbott and Costello Meet Frankenstein screenwriter Frederic I. Rinaldo, who also wrote the scripts for several Universal films, including Abbott and Costello Meet the Invisible Man (1951); Hold That Ghost (1941); The Black Cat (1941) and The Invisible Woman (1940).