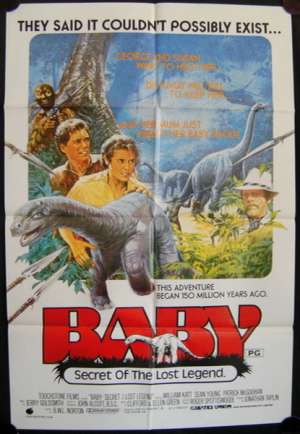 Baby: Secret of the Lost Legend is a 1985 American adventure fantasy film directed by Bill L. Norton and starring William Katt, Sean Young, Patrick McGoohan, and Julian Fellowes. The story is based on rumors about dinosaur-like creatures called Mokele-mbembe purported to exist in Africa. Produced by Disney's Touchstone Films unit, it was first released on March 22, 1985. A recut version aired on television in 1989 under the title Dinosaur...Secret of the Lost Legend as part of the Wonderful World of Disney. The score to Baby: Secret of the Lost Legend, a hybrid of orchestral and synthetic elements, was composed and conducted by veteran composer Jerry Goldsmith. Goldsmith recalled the experience with such fondness that he insisted it be included in an industry tribute album featuring highlights from his scores in 1993.