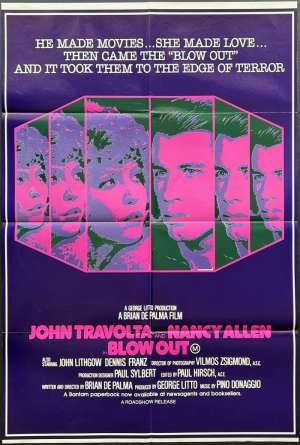 Brian De Palma, acclaimed genre maestro behind such classics as Carrie, Dressed To Kill and Scarface, delivers a first-rate, political paranoia thriller, inspired by Michelangelo Antonioni's Oscar nominated classic Blow Up, expertly furnished with atmospheric tension and stylish edge-of-your-seat set pieces. Jack Terri (John Travolta, Pulp Fiction) is a talented sound-effects technician who records atmospheric audio for the movies. Driven to capture the perfect most authentic sounds he ventures out into the dark of the night, where his talent and attention to detail may become his undoing. Accidently recording the blow-out from a fatal automobile accident, responsible for the death a high-profile presidential candidate, Jack is instantly drawn into a web of conspiracy and intrigue that will place him in a position of considerable jeopardy. He enlists the help of Sally (Nancy Allen, Robocop), a possible eyewitness to the crime, desperate to uncover the truth and prove his alarming theory of political assassination. With a stunning new transfer supervised by De Palma, also featuring John Lithgow (Rise of The Planet of the Apes) and Dennis Franz (NYPD Blue), Blow Out is a riveting ride into the mechanics of movie making, exploring the fear of paranoia and playing on perception with more than a knowing nod to Alfred Hitchcock.