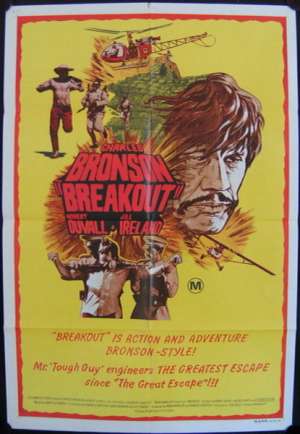 Breakout is a 1975 action film from Columbia Pictures starring Charles Bronson, Jill Ireland, Robert Duvall, John Huston, Sheree North and Randy Quaid. Bronson and Ireland, the lead actor and actress, were married in real life. The film is notable for giving the usually serious Bronson a more comedic, lighthearted role. The film was loosely based on an actual event that took place in August, 1971. The prison scenes were filmed at Fort de Bellegarde, France. Romani people (also known as gypsies) local to Southern France stood in for many of the Mexicans. The original director was Michael Ritchie, but he did not like the idea of the female lead being played by Charles Bronson's wife Jill Ireland. Bronson threatened to leave the project if Ireland was not cast so Tom Gries came in as director. The film earned $16.0 million in North American theatrical rentals, and was the 21st most popular film of 1975.It was distributed internationally. Part of its box-office success was due to the then-novel strategy of "saturation booking", in which Columbia released 1,300 prints simultaneously, combined with a heavy advertising campaign on the opening week. This was one of the first major studio films to use this method of release. Inspired by the success of Breakout, Universal Pictures used the same technique to promote Jaws.